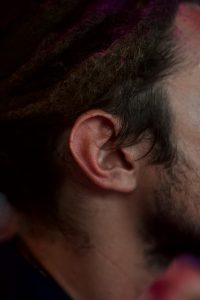 I grew up in Aranui, one of the most challenging suburbs in Christchurch. It ranks right at the top for crime, alcohol, drugs, mental health etc. I didn’t go the way of crime, and this has given me confidence to say I think I can help people like this, not because I am better, but because I have an awareness and insight into why people stay locked into such issues.

Aranui definitely feels like home now, and I’m glad that I can say that now, because for years I really struggled with feeling ashamed of living and growing up there. I had parents who were mostly good, but struggled to model some basic fundamentals of parenting. They (now both deceased) probably thought they had been good role models, however, an outsider might say some of what they did was unhealthy and unwarranted. I didn’t quite grow up in a Once Were Warriors household. That stigma that just because you’re brown, Jake the Muss must be your father who beats up his missus, you have lots of parties, gang members, dope, booze, holes in the walls and gratuitous violence. That wasn’t the kind of upbringing I had. Yeah, there was a lot of drinking in my home, and my mum struggled with depression and other mental illnesses. The reason I didn’t go the way of crime was the support people. I can’t hammer home just how important that was, to have people who stood there beside you even when you told them to piss off.

It’s about having a significant person that believes in you and has that unconditional love, you know? They know you’re going to make mistakes, and it’s ok to make mistakes. The church had a huge influence over my life, school teachers and a couple of people in my own Whangai family.

Drugs and alcohol can be coping strategies. They can become your best friend. Then when you’ve got people saying you need to give them up, it’s like telling a parent to ditch their child that they love on the side of the road and never see them again. It’s the same with the relationship people form with their addictions – it’s hard to part from something that you have always relied on for support.

For me it was alcohol, and from having been stuck in addiction, I can empathise with others instead of being judgmental. I know it’s frustrating for people who are working with those in addiction, they work hard to set up a plan, but they still choose their old friends, ‘cuzzie’ drugs and ‘bro’ alcohol. You can’t understand it unless you’ve actually been in it yourself, and it takes time and patience to help people see the long term consequences.

Helping someone to get out of an addiction is about knowing where a person’s at. You can’t force a person who is at a 6 straight to a 10 (complete abstinence). If you try, they’ll tell you to piss off and rightfully so! I did! The next step from a 6 is a 6.5, and that’s achievable. It’s better to set small steps and achieve above and beyond rather than setting massive goals and failing miserably!

I didn’t really know my birth dad but I heard stories about him from my mum and those stories weren’t that flash. So I resented and hated him as well. When my mum died, it was a catalyst to get right into the drinking and to flirt with cannabis; I was an impressionable 13-year-old just struggling to grieve because I was never taught how to do this in any other way. Through the support of good people I was and have been able to strengthen my resilience towards alcohol.

When I hit rock bottom and fell flat on my face, that’s when I understood a lot of the shame that Māori have when they’re in that courtroom, standing before the judge awaiting sentence, or conviction. The guilt and shame of having their family in there, in tears and thinking – what’s gonna happen now? Am I gonna go to prison? And how do I bounce back from all this shame? People look at courtrooms with all these brown faces and think – oh, it’s just the norm for them. And it’s not. It’s not! I think a lot of Māori people go through that phase of feeling ashamed of the culture. If you look at the media, the cameras can paint a bias and unhelpful belief about the culture and selectively focus on the negative things. That’s a stigma that needs to go.

In my role, it’s about respecting Māori. If you really want to make a dent, you’ve got to really understand Māori, because they represent a huge percentage of the people who have committed and who are committing offences. Let’s be clear that being Māori is not a factor in making wrong choices. Remember that 92% of Māori will never go into the criminal justice system, but that 8% makes up 51% of the current prison population.

Gangs have significantly influenced people’s perception of the Māori culture. We need to work out how to support Māori in the cities, because in many ways the gangs have become a substitute for a lot of the rural values/kawa/tikanga. Back from when many Maori whanau were forced into urban areas or cities in search of employment and a better way of living. Our people back then were mostly ill-equipped to assimilate into such a foreign society that whipped them of their language in their own land. It’s about Māori succeeding as Māori, through a Māori lens. What does that look like? Don’t know. We haven’t done enough work on it.

It’s about government working with iwi and not just in a token way. Not just ticking that box. If you’re genuine about it, you’ll see some massive changes. If Māori succeed, the whole country succeeds. It’s not about one culture dominating the other or ethnic privilege; it’s about both combining, because they both have strengths.

I think that we run on a primitive concept of justice. It’s a Western model and we need to look at different models and ways of “correcting” people. It’s about people coming to prison as a prisoner, but feeling like a human and leaving like a human.

The majority of people who commit offences are actually remorseful for it, in some way even if they don’t say or they act like it. They may not know how to say or show it and may even think that apologizing means you’re weak.

There are some people who do need to be locked up, because they’re a danger to themselves, and they’re a huge threat to society. But that’s just a small percentage of our prisoners. Our system is following the English and American models of penitentiaries, but I think we need to look at different models from overseas. In some European countries, they’ve revolutionized their way of correcting people. For them, it’s about placing offenders of medium risk on an island, to live as a community. And I love it, because if they’re teaching/encouraging people to be a part of a community, then that’s a nice fit for when they go back into a mainstream community.

If you really want to make a dent in helping people in this country, then help Māori. The stats are disproportionate to every other ethnicity. If I were King, I’d start with putting in place 50/50 partnerships of Māori/Pakeha in everything. In all of our government organizations; in parliament; in everything! The way that it was supposed to be. That was the ultimate purpose of Te Tiriti o Waitangi. And that’s because our early missionaries (among other reasons,) saw the advantage of the two cultures working together.

And would those partnerships like each other? Hell, no! But it’s good. If you’ve got 50/50 partnerships, no one can dictate what the choice is going to be. Everybody needs to learn to work together.

The judicial setting can be quite intimidating and quite foreign for a lot of Māori and Pasifika. Restorative justice on the other hand is almost like a meeting, we’re gonna talk about a serious topic, but it’s not as formal as in the courts, so it helps offenders to be able to talk about their stuff without being shut down or being intimidated by the environment or process. It also allows victims to come along and talk. It’s about empathy – from victim to offender, and offender to victim. The offender can talk about what they did and why, without feeling judged, but challenged in a respectful way. We need more of that going forward.

My heroes aren’t well known celebrities like Billy T James or Temuera Morrison. My heroes were people like my uncle and aunty. He’s Māori and he started his own concreting business years ago. He and my auntie used to live in a state house in Aranui next to us and always looked after me. This snotty nosed Maori boy who would just walk in their front door and say, “Mum’s not home,” then I would make myself at home, wait for dinner and then fall asleep in the lounge. They never ‘once’ told me to go away and they have continued to support me to this very day! They are my heroes! Also my youth Pastor and his wife who now live on the Gold Coast; Whaea from Ruia Te Kakano; and my amazing English and History teacher from Aranui High School – I will never forget their kindness.

I come from a large family, there are 15 of us kids, and I’m the youngest. Most of them think I’m God’s bloody gift to mankind, because I’ve done some really good things. But you know what, mate? I’m not. I’m happy with who I am. I can accept when I don’t get it right, and I can also accept when I do get it right. In regards to wanting to be liked and admired, I don’t like that anymore. I used to because it fed my insecurity. But now I just don’t care about that stuff.

I have worked with some Pakeha kids also in the middle/upper stratums of society, and they’ve got issues as well – I know that’s not rocket science. Their issues are similar to most young people, they just want to be heard, loved, accepted and understood.