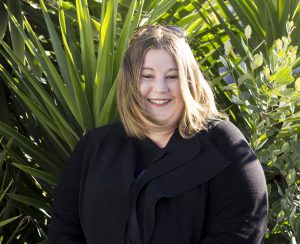 My husband and I are completely opposite. He’s challenged me in so many ways to turn my life around. If not for him, there’s a very real chance I could have been in prison as opposed to helping prisoners, which is an absolute asset to my job, because I know what it’s like to have addiction issues and stuff like that. I’d spent 10 years working in hospitality, getting in with the wrong crowds. Then my husband’s uncle, a tetraplegic, challenged me to do a year of law school. I was 100% convinced I wasn’t going to pass, now I’m a lawyer. I provide prisoners with access to free legal information and welfare support.

People turn a complete blind eye towards what actually goes on in prison. I think before I started in my role, I never thought of NZ prisons as a bad place when you look at the States and other countries, I actually thought our prisoners had it pretty sweet. We were world leaders in the way we treated youth offenders back in the days when we brought out Family Group Conferences. New Zealand was like a beacon of light for the rest of the world on how to do things.

I want NZ to have a prison system they can be proud of. Prisons are important in society for those who have done a serious wrong, but after that we need to be looking after people. New Zealand is absolutely failing. A lot of people in prison now shouldn’t be there. They should be in support services, or rehabilitation. We have 80% addiction rates, high illiteracy, and crazy numbers of people who have have been victims of childhood abuse. Obviously a huge amount of personal responsibility needs to be taken, but society needs to take a lot more responsibility than we do with both prevention and rehab.

Do you know what time give prisoners dinner? Often it’s early afternoon. The Ombudsman in a recent report in June 2017 told Hastings prison off for feeding prisoners around three in the afternoon then locking them in their cell until the morning. It sounds like a small thing, but prison should be a place where people learn better habits and skills for living, and learn about treating people with respect, that’s gotta start with some role-modelling.  Small indignities like that in prison really change the environment.

It’s really hard for Corrections, because they have obviously to front up like they’re doing what they’re meant to be doing. So you’re always going to hear, ‘we’re doing this, doing that.’ But if you actually sit down and analyse it, Corrections are really under-funded and society just doesn’t care. Most middle-class average New Zealanders who don’t have brushes with Corrections and prisons don’t care. But if their son or daughter or family member were to get locked up, they’d be up in arms. As soon as it gets personal, it’s different.

I really love my job, but when I go and spend some time at home I realise how little time I spend there. One of the things I really love is driving. With my busy work schedule, every three or four months I need to take myself away and just go for a really long drive, like three or four hours. It  kind of helps me reboot my system. I wish there were 3 of me and 72-hour days, there’s so much to do, I just want NZ to have a prison system they can be proud of.