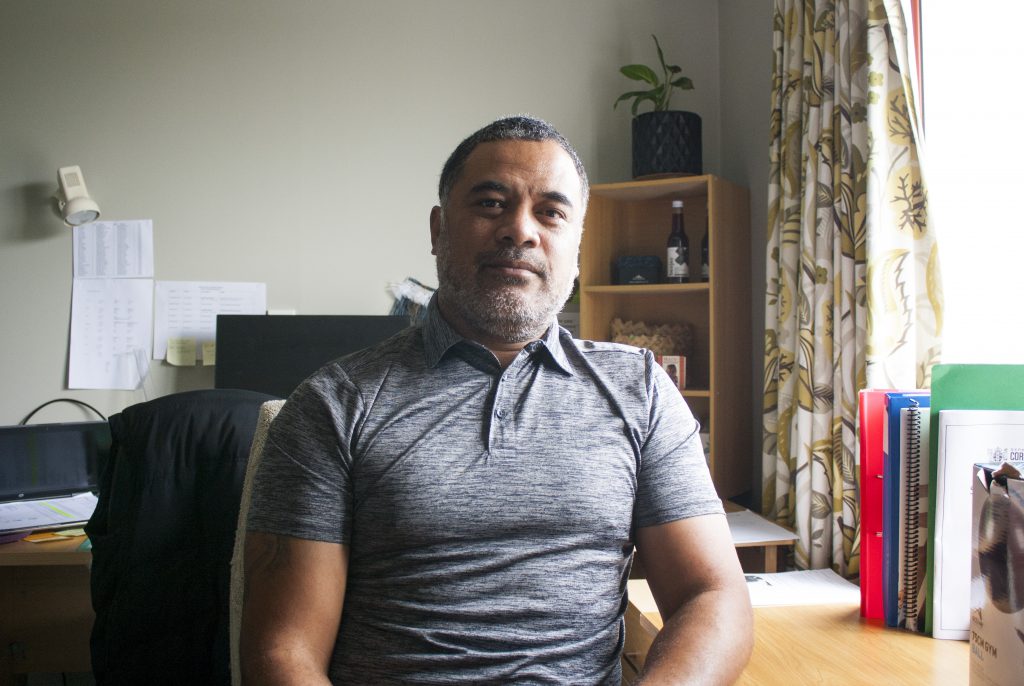 My parents are both from Samoa. They migrated here in the ‘60s and started having children. We grew up in St Albans and there were only a handful of brown faces. I can count four. Childhood was a mixture of a bit of craziness and a bit of stability. My dad had his truck license and his taxi license so he was away quite a lot. Mum was working in the early parts and then a stay at home mum from when I was around seven. I remember hearing a lot of screaming in the house. It was my aunties and uncles beating up another one of our family members. They were accusing him of sexually molesting one of our other family members.

We also grew up as part of a Samoan church in Christchurch. It was part of the Assembly of God movement back in the 70s, and one of the things that I remember about the church was that it was all-consuming. We were there a lot, and people from church were always at our house having cups of tea. In those days the children were sort of put to the back – all the adults would go into the lounge and eat the best foods and all the kids would be in one room playing with whatever’s been given. I remember little things like my parents going off to church with everybody and forgetting me at home. I would have been about seven.

My father was always quite heavy handed with us. It was regular for us to get beatings all the way through our early teens. My oldest brother was probably the one that got it the worst. He would have been about 15 when my dad broke his nose, busted up his lips and blackened one of his eyes. That whole period seemed to be marred with a lot of unnecessary violence.

Those violent moments built within me a real hatred towards my Dad and when I was around ten or eleven I remember thinking really clearly that when I get of age – when I get to a point where I feel strong and big enough – I was going to kill the man.

I went to Linwood College. I really loved school because I enjoyed learning, but I had this hatred in the background. And I was introduced into an environment where there was a lot of racism – pretty much half the class was calling me bonga, and nigger, and all sorts of things.

My teacher didn’t really do anything about it. I remember the anger just growing from that point on because I wasn’t being protected by teachers and so I had a hatred towards them too. I ended up beating up pretty much all the racist people in the class in front of everybody.

And so while I was at Linwood College I had most of the year off school – there was a lot of truancy. I remember talking to mum about it and her getting really angry with me, but she was immersing herself more in church and we saw her less and less. With no supervision, you just do what you gotta do to survive, so we would break into shops to steal food and clothes, and then eventually migrated into alcohol and drugs. The alcohol and drugs was more about meeting up with other young people who felt the same way.

Prison was just an offshoot of the fact that I had become so angry with everybody. I was assaulting people most weeks. I was robbing places at knifepoint and I was mugging people on the street. I’d become a violent offender and was labelled the Godfather of Youth Crime by the age of sixteen.

I remember when I was in Invercargill prison, one of the things that really stood out for me was the amount of time we were locked up. I vividly remember thinking that I was going mad. I remember I started talking to myself and I started to see things, and talk to people that weren’t there. And then I would catch myself and think “holy shit, I’m losing it.”

I think we have to rethink that stuff. It can’t just be about punishment. There are other ways out there that help to restore some human dignity back into the lives of people who are damaged. I think one of the things that stood out for me was the amount of skills that people had. A lot of it seemed to be in the area of arts: carving, paintings, drawings, music, rapping, and poetry. The amount is just staggering. And if we had treatment that was focused on trying to restore some human dignity back then, I think we’d be on a better path then where we are heading now.

I don’t know what prompted me to think, “grab some books to keep your mind engaged,” but that’s what I started doing. I asked the officers if I could get some books from the library and I started reading. It was probably the thing that saved my sanity, to be honest.

I kept reading and that’s where I did my school certificate as well. About a year and a bit into my sentence I went to a class and they said that they did school cert Maths, English and Science, and it perked my interest. What never left was my love for education. And so I passed all those things when I was prison and I was surprised at how easily I passed, because the message that was drummed into me when mum wasn’t in a good space was, “you’re useless, you’re never going to amount to anything.”

Once I got my school cert, I had a sort of epiphany: “My mum fucking lied to me.” And so it was easy to discard her words from that point on. I had solid evidence that I wasn’t stupid.

After I got out of prison my probation officer organised for me to go to the Queen Mary rehab up in Hanmer, so I went up there and did the Taha Māori programme. It was mostly a 12-step programme, but it also had a bunch of other things like you could do like kapa haka, waiata, prayer, and counselling. It was rehab, it was learning, it was working, getting back into routines and enjoying sports again, which I used to love. I started playing rugby league and just biking around.

From 24 onwards I started doing a lot more leadership stuff at church. I started to run youth groups and got into music again. Me and a bunch of guys ended up forming a band, Tribal Links, and we travelled all over New Zealand doing festivals. We even got to open up for Lionel Ritchie when he did a concert here in Christchurch.

And on the work front it was youth work. I started working in a disabilities unit over at Riccarton High School and loved it. I loved working with the intellectually disabled kids, helping them connect with their different subjects and  removing a lot of the shame and embarrassment that they carry.

After immersing myself in that line of work, I eventually got to the point where I needed to grow academically. So I did a certificate in Theology and Biblical Ministries. I loved it – the teachers were fantastic, and the best bit was probably discarding 80% of what I had come to know through my own childhood church.

I started working for He Waka Tapu about a year ago. I came in as a clinician for the team and then they put me up into a senior clinical role, based on my experience.

Oh, and I got married! I now have three children – my eldest, Lonatana, to a previous relationship, and Ropeta Ane and So’omalo with my wife Peati. The message that I give them every day is, “I love you. Do the best that you can and I’ll make sure that I create an environment that is conducive to you doing the best that you can.”