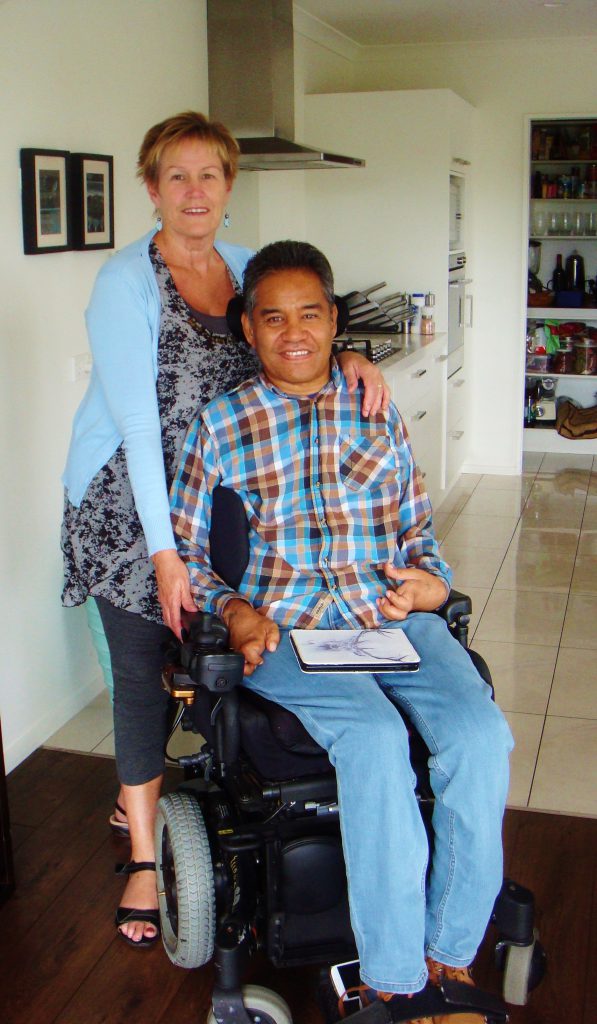 We’ve been going in to the prisons as mentors for 3 years now, every Saturday and Sunday. The first time we turned up at the Men’s prison, goodness gracious the young lad had forgotten to put our names down, and he wasn’t going to let Dave though, even though we had our IDs and everything. And last week, they wanted to take David out of his chair, because it was going to set the machines off… Then another guy came along and said, “I’ll take care of you guys.” It was the absolute opposite, it just depends on who’s there.

We work in the sex offender’s unit. It’s a compulsory program, so it’s in their best interests to behave well. It means the staff can be a bit more relaxed with them, which is really lovely to see. There’s one guy in there, he’s only young… 21 and he’s already done 3 years. So he was just a kid when he went in, only 17 or 18. And he doesn’t know how to deal with his emotions, as with most 21 year old boys. He’s still got another year to serve. He really needs a lot of encouragement.

Sex offenders are all lumped together under that umbrella term, regardless of the ages involved. A sex offender and a pedophile to us are poles apart, but to society, they’re all considered disgusting – the scum of the earth. So their transition into the community is shocking, because nobody wants them. They are restricted with accommodation, jobs, and community. And those are all incredibly important things to keep someone from struggling and possibly re-offending. The stigma means their offence has a really long term effect. Others can do their time and it’s over, but not them. One man we’re dealing with, his whole family absolutely… wiped him. So he’s dealing with that as well.

The difference is, for a drug-dealing gang member coming back into the community, a normal family person will think – I don’t deal with drugs, so my path and his path won’t cross. But with the sex offender, the community person thinks – I’ve got children… our paths could cross… me or my kids could get hurt, so I’m going to push him right away. That’s the difference in the thinking. There’s a lot of fear, because now it’s become personal.

When you hear their stories, you have a lot more empathy, you see how they ended up where they ended up. One guy said he and his brother shared a coat. He had no chance, really. At home there were drugs, alcohol and he got bashed. He went in and out of borstal, then joined a gang, and that’s where he said he first learned discipline. Wrong sort of discipline, but it was still a discipline. He couldn’t read or write but while he was in prison he managed to do half a degree in sociology. He realised he had a good brain, but just hadn’t had a chance to use it.

There’s such a mix in there all together, short term, long term, high and low security. Some are innocent, waiting for a re-trial. And some of the officers have become hardened. They remind me of being a nurse in the Alzheimer’s unit. When it gets tough as a nurse, you have to think – if that was my mother, how would I like her to be treated?

David: When my accident happened, I had a daughter on the way, so that took the focus off myself. Then, when my first wife and I split up, I hit rock bottom and tried to kill myself. I wasn’t a Christian at the time, but cried out to God for help. The ones we help in prison, we take hope to them. Even though they’re in prison, they’ll be out someday, and even in prison, you can choose a good attitude. Lorraine: David’s in a prison also not of his choice, but you can see he’s got such a lovely demeanour, and it speaks volumes.

We met when I had an operation, Lorraine nursed me in the Spinal unit. Neither of us were ever going to marry again, but you know… famous last words. We’re both pastors, and work as a team. You have to work as a team at home first, because who you are at home is who you are out there. It’s a bit unique to minister together, but those who are connected with us say that’s why they love it. And with the prisoners, we’re like a mum and dad figure, which is an area many of them have struggled with.

One guy in prison alerted the staff to his health problems, but it was ignored. By the time he got to hospital, the septicaemia had set in, and his system was shutting down. He’s now on dialysis. 10 days and he hadn’t even gone to the toilet! Being Māori, he’s quite staunch, a lot of them hold on to their pride and don’t show they’re suffering. I don’t see their offence, I just see a guy who is frightened and deserves dignity. A lot of them are carrying a huge amount of shame.

We try not to run ourselves ragged rescuing people, because they have to take responsibility for their actions, we can’t help them if they don’t want to change. Some of it’s hard work. You think you are making some ground and then all of a sudden, “oh no, not this again.” And the whole family is impacted by the lack of a parent at home, they’re all victims, in a sense.

We also do fostering. One of our young men has just turned 15, but we’ve had him in our life for nearly 6 years. He was on the top end of anger issues and everything else but is doing so well, we’re seeing the effect of love and support. He’s got such a beautiful heart. We pray every night for him.

We hear from prisoners that the so-called inside help they get is just a joke. And it only takes one person to spoil or stop a program for everyone. The drugs are still getting in there somehow. Security is fairly inconsistent. There are some work programs happening, and a few resources like a gym and a library. That’s mostly at Rolleston, though, which isn’t such high security. It’s cool to hear that happening.

It’s amazing that we got involved in prisons, because I would have thought it would be the last place I’d end up going. My daughter moved out when we invited an ex-prisoner over to the house. There was no way we would have put her in a position of being unsafe, we just didn’t realise she’d be concerned with that. The fault was mine, lack of communication. We made peace, but she moved out. A lot of people have fear about ex-prisoners, maybe because they don’t know what exactly their crime was, and maybe because if they’re big, or have tattoos, they can appear intimidating.

There’s a teacher at Rolleston who said, “I’d never thought when I came here that I’d be teaching ex-murderers. But they’re still people’’ And that’s the key. They’re not animals. There are some who act like animals because they’ve been treated like animals. One guy we found out had been locked in a kennel at his home. That just makes me want to cry. How else do you expect them to behave normally? And the staff aren’t trained to look after people with psychological traumas. They’re criminals, but shutting them up and treating them like animals doesn’t fix that.