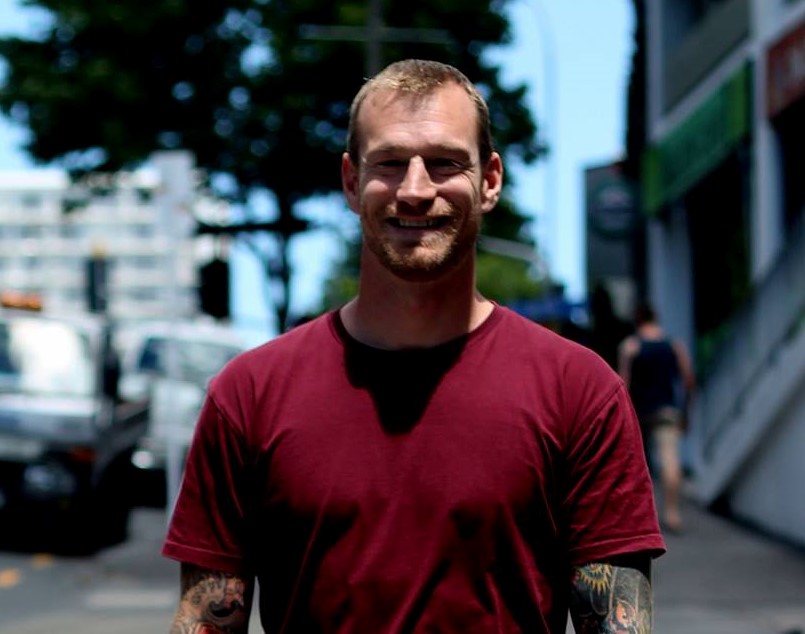 I grew up getting some pretty standard kiwi messages like, ‘take a concrete pill’ and ‘harden up.’ I grew up at a time when the ability to discuss your emotions wasn’t a valued skill in men. My dad was very much a man of his generation in that respect. He grew up during WWII in London, during the Blitz. No wonder he wasn’t so big on cards, cuddles, and ‘’I love you’s.’’ The best way to show him affection was by doing manual labour. Forget the hugs, go chop firewood. I was one of 4 boys, and we all thought we’d join the infantry, and try to go on to the special forces.

My mum was always an emotional support, so it was tough when she got sick. In my teens, whenever I felt emotions that made me feel weak, scared or vulnerable, I thought there was something wrong with me, and I didn’t have the skillset to deal with them. I think I was also depressed, to be honest. And like a lot of young people, males in particular, that manifested itself in anger. I tried to find solace in drug use, because I just wasn’t coping with my mum’s cancer. The choices I made at the time meant I put myself in high-risk situations, and I was associating with people who weren’t concerned with my wellbeing.

She died of cancer when I was 18. Three days after her death, I met up with my drug supplier. What I didn’t realise was that he had an aggressive interest in sex acts with young males, and what he didn’t realise was the volatile state I was in at the time, and that I’d been fighting my whole life. So before the day was up, he was dead, and I was behind bars. I would end up behind bars not because I defended myself against an attack and there was a miscarriage of justice, but because I choose to go significantly beyond what was required of me in terms of self-defence. I made every choice that put me into that situation, and then I choose to end his life when I could have just let him leave. As a result of this choice I would spend nearly 11 years behind bars, some of this time in New Zealand’s toughest prison.

I learned a lot – firstly how to be ready to be attacked all the time. Do you know you can make a weapon out of gladwrap and a toothbrush? Because people often attack you when you’re at your most vulnerable, I learned important lessons like the need to take a leg out of my pants if I need to sit down and use the toilet during the day. This was so I could stand up and fight if I was attacked. I also learned a lot about crime in prison, how to steal cars and beat alarm systems. And there was a safe-cracker in there, a really intelligent guy. He put a question to me one day, saying – here are two objects, one really heavy, one really light. Which will hit the ground first if I drop them at the same time? I thought he was nuts. When they both hit the ground at the same time, it blew my mind.

From that moment, I realised there’s a lot to learn about the world. That I had beliefs that could be wrong, and could change. Before that, I’d thought education was just what you do to get a job. It’s so much more than that. It increases the accuracy of beliefs you have about the world, and enriches your whole experience of life.

So I began to study. Some of the staff were really supportive, others didn’t want to let me off prison work in order to study. I surprised myself by completing my whole undergraduate degree in there. I chose to study Psychology, because I was interested to know what makes people tick. It was also to help me predict the attacks of others, which was a constant concern in there. Yet it mostly helped me to understand myself, and to normalise and manage the emotions I’d thought meant there was something wrong with me. Now, I run a course called, ‘’what’s your prison?’’ because I came to the realisation that I was in prison internally long before I went to physical prison.

After my undergraduate degree, the next logical step was a Masters degree, which I also completed while in there, and began my doctorate, which I finished up outside. There are pros and cons of studying in prison. There are fewer distractions from daily life, and you’re not having to try to pay the rent. On the other hand, resources are lacking, and it’s a pretty lonely endeavour, with no other students to bounce ideas off. I really appreciated my lecturers, some of whom actually travelled hours for a face-to-face supervision appointment with me.

Since I was released, I’ve worked in a number of roles, helping individuals and businesses on their own journeys of change and growth. It’s ironic that when I teach so-called ‘’soft skills’’ (like managing emotions and stress, and influencing without being authoritarian) they’re actually the hard skills for people to learn, and the biggest career and life barriers.

Regarding prisons, there’s evidence about what works and what doesn’t work. Data shows that re-offending is reduced when there is more offered in the way of education, alcohol and drug treatment, and just not locking people up who aren’t a direct threat to society. The focus in New Zealand seems to be more on containing and managing the large numbers of prisoners, rather than the effectiveness of the system. It’s all driven by trying to get votes at election time, creating policies which have popular appeal, rather than doing what actually works. Because what actually is proven to work is seen as being soft on crime and criminals.

Restorative justice is a powerful tool. It really helps both sides – empowering victims and helping offenders to understand the extent of the impact of their behaviour. I would like to see restorative justice become a cornerstone of our justice system, not just an occasional occurrence.

We often write people off as being bad people through and through. I believe everyone has the capacity to change and do better. We’re all more than just that one chapter of our lives. Everyone can change, and decades of research shows this, our brains can be remoulded. That’s not to say it’s easy, but with the right opportunities and support, it’s possible for everyone. The potential to completely transform our lives is always with us, we just need to decide to make the choice to embrace it.